Food chemistry is one of my favorite topics to discuss, especially when combined with actual food :-)! That’s why this month is food chemistry month. Gluten-free is currently a hot topic in baking and cooking, but gluten is too interesting to go without. That’s why this post is all about gluten development, using bread and scones as two great examples!

It’s pretty amazing how popular gluten-free has become over the past few years. For those with celiac disease, it’s a blessing, finally, there are lot and lots of gluten-free products available! I, on the other hand, don’t have celiac disease and love gluten. That is, I love bread, and there’s no good bread without gluten. So, today’s post is all about gluten, more specifically gluten development, with, at the end, a great recipe for making scones.

Even for those eating gluten free I think it’ll be mightily interesting. It can help you understand why breads without gluten have a different texture and maybe help you find ways to work around it (although I won’t focus on this).

Let’s start with the basics, gluten are proteins. More specifically, they are proteins that are present in a range of wheat-related flours such as barley, rye and wheat itself. Gluten is the overall name for a range of proteins, most prominent are: gliadin & glutenin. These proteins are storage proteins of the wheat itself. Proteins are complex large molecules. Gluten have some special groups on them which allows them to form interlinks together and make one large elastic network. Have a look at my infographic on flour for a visual representation of gluten.

There is a lot of scientific literature on gluten and gluten development. I’ve gone through quite a bit of it to try to understand gluten better. I’ve always considered gluten a little mysterious. Kneading and developing gluten would develop this network and make better bread. But why and how it does that, that remained kind of a mystery to me. So I decided to dive into it.

So as I just said, gluten are proteins. To understand how gluten works you have to know a little more about proteins. Proteins are long chains of amino acids. This long chain has a lot of smaller groups of atoms sticking out of the chain. Which groups this are depends on the amino acids which from the long chain.

It’s these side groups that make proteins special. These side groups can interact with one another. Because of these interactions proteins can take up all sorts of shapes, helices, plates, etc.

In gluten there are two major types of interactions at play: hydrogen bonding & disulfide bonding. Hydrogen bonding is a very common type of bonding, in which an oxygen atom and a hydrogen atom interact in such a way that they pull each other together. In a disulfide bond two sulfide groups interact, pulling each other to one another. Below you can find a simple schematic of the process.

So what happens when you made a dough? One of the main things that occurs is that a liquid (water) is mixed with the flour and thus the gluten. Starch will absorb some of the water, but so will gluten. By adding the water, the gluten can be activated. It gets the freedom to move around more and form these bridges as described above.

By kneading a dough you are effectively helping the gluten proteins to find another and forms all these different bonds. By forming these bonds a network of gluten proteins is formed. This gluten network is pretty flexible. A slight chemical analysis will show that actually the proteins are extending and pulling together again. So the loops in a protein might be extended or parts of a protein may slide past each other. However, once the force is gone, they will relax again into the original shape.

As I wrote before, I was never very good in kneading and thus in baking bread, until I bought a Kitchenaid (stand mixed). From that moment onwards my breads came out very well, all nice and fluffy. This was mainly caused by the development of gluten. By kneading it longer and better, the gluten had more chances to interact and form this large gluten network!

Gluten development is actually very important for a bread. Reason is that this gluten network has to hold on to the air in a bread. The gluten network is flexible enough to rise when yeast produces gas (carbon dioxide), but strong enough to keep the gas in so it stays nice and fluffy. The better developed your gluten are, the better it will form this airy structure. 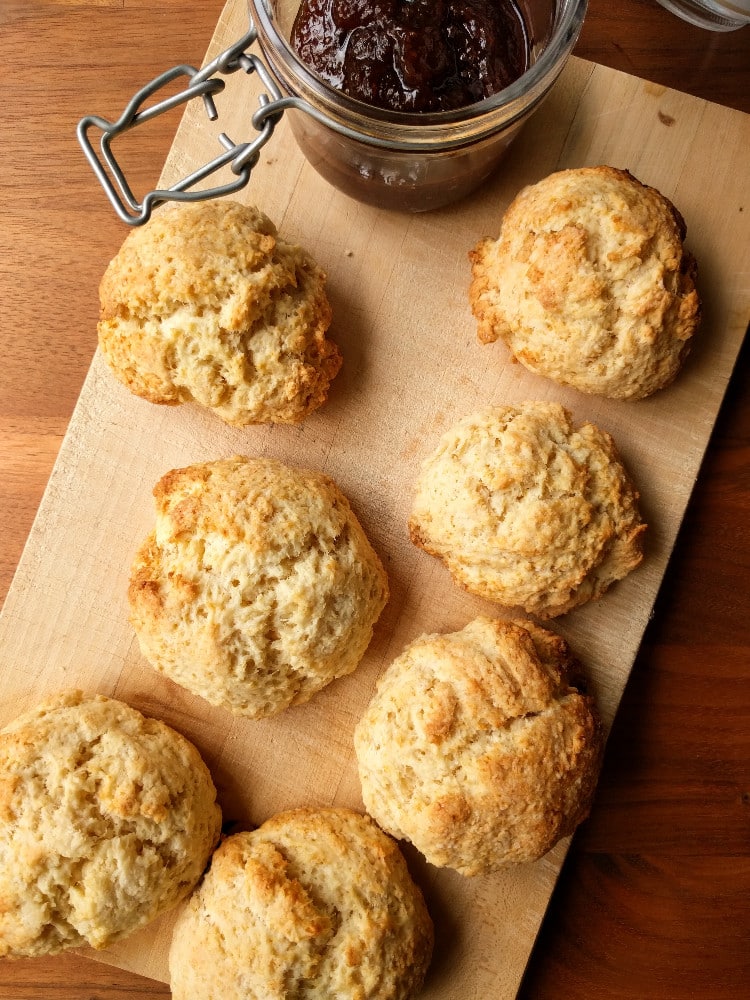 Gluten development in scones is prevented in several ways. First of all, recipes will always tell you not to knead or mix the ingredients of a scone for too long. If you would do this, the gluten would get the chance to interact and form these large structures. At the same time, the addition of fat is a great way to prevent gluten deveopment. Gluten need to be able to interact. However, if there is fat in between the proteins, they won’t be able to form these bonds and make as nice a network. Scones contain quite a bit of fat which you often have to rub in at the start. This is all to prevent the gluten from forming these networks. A similar thing is done for pie doughs.

Just in case you want to read more, I’ve found some other pretty interesting websites: Exploratorium on gluten, do it yourselves lab test with gluten and fat and a whole post on demystifying gluten.