Sometimes it’s amazing how a small process step can make such a big change in a food. Merely heating some butter, until it turns brown transform a yellow/white solid fat into a flavor bomb. It’s promoted from being just another ingredient to becoming a star player (e.g. cookies).

Behind that transformation hides a bucketload of chemistry and food science. It might be simple to make, the science behind it is surprisingly complex!

The main reason for making butter into brown butter is for flavor. Brown butter has a very rich flavor profile. It has hints of caramel, and even nuts. Using brown butter in a recipe adds a lot of flavor.

Making butter into brown butter does change its behavior and composition and can as such impact how the food made with it turns out. This is especially true when baking products such as cookies or cakes.

How to make brown butter

As long as you don’t have to make butter yourself, transforming that butter into brown butter is very easy. It consists of just one step: heating the butter until it has turned brown! While heating the butter it is mostly a matter of proper temperature and color control. You don’t want to burn the butter, while also ensuring enough flavors are formed.

At the start of your brown butter process, nothing much is happening. At first, you’re just melting all the fats in the butter.

Butter is made up of approximately 80% fats (or more), water and a few minor ingredients (<2%). If you’re using salted butter, of course, salt is in there as well. The fats are all the fats present in milk, concentrated into butter. Most fats will have melted once the butter has reached 45°C (113°F). The butter has turned liquid.

The fat content of butters is regulated in a lot of countries, however, the required content may differ between regions! Also, not all butters will melt at the exact same temperature, that depends, among other factors, on the feed of the cow and the season!

You’ll continue heating the butter, and it will continue to increase in temperature until it reaches the boiling point of water, 100°C (212°F), at sea level. This is when your butter starts to bubble vigorously.

A little less than 20% of butter is made up of water. Normally, those little droplets of water are dispersed throughout the fats, making an emulsion. However, at this point, the water will start to evaporate and as such leave the butter.

A slight foam will form on top of the butter during this phase. This consists of mostly proteins that are literally foamed up by the evaporating water. If will disappear further down the process (or you can scoop it up, though this will remove potential flavors!).

At some point the bubbling will slow down and eventually seize. You might hear some pops of last bits of moisture evaporating. From this point onwards, the temperature of butter will continue to climb. As long as water was evaporating, the heat was used to evaporated water. Now that the water is gone, the energy wil be used to heat up the butter.

Towards the end of the bubbling, the butter will start to turn brown. A lot of different chemical reactions will occur simultaneously. Most of these are initiated by the minor ingredients of butter. Butter contains a decent amount of proteins (about 1%) and a very small amount of milk sugar (lactose, <0,5%). These react in the Maillard reaction.

Even though the Maillard reaction starts with sugars and proteins, once it gets going, it’s a party that everyone can join in on. Fatty acids especially likely join in.

It’s during this phase that the butter not only turns brown, but also develops its characteristic nutty aroma. Even though the Maillard reaction can occurs in many foods, the unique composition of each will result in a different flavor.

The French refer to beurre noisette when talking about brown butter. Literally translated this means hazelnut butter, clearly referring to that nutty aroma!

Some recipes using brown butter will use it immediately after it’s done. It might form the start of a sauce, or the starting point of a cookie. In other cases, you might be asked to cool down the brown butter again.

During cooling the fats in the butter will resolidify. However, that does take a little while (especially if cooling at room temperature). As a result, all those brown bits and pieces that were formed during browning will sediment to the bottom of the pan/bowl. Once the fats have turned solid again the particles will be locked in place. As such, if you want to sieve them out, you should do so when the brown butter is (still) warm.

The cooled brown butter contains mostly the same fats as the butter did. Nevertheless, the texture of brown butter will seem different. This is because butter was a water-in-oil emulsion, whereas brown butter is just fat.

Brown butter is a very simple and versatile ingredient. It can shine in both almond tuiles as well as a savory sage sauce and many other applications. Two widely different dishes, but brown butter improves both of them.

Why are clarified butter and ghee not brown?


Clarified butter is butter from which the water has been removed. However, when making clarified butter, the butter is heated more gently, just enough for the oil and water to be separated. The water phase contains all the proteins and sugars. So once the water has been removed, the initiators of the Maillard reaction are gone. Even though fatty acids can join some of the reactions in the Maillard reaction ‘party’, they can’t initiate it themselves and will be stable under high(er) heat.

Why does brown butter contain dark particles at the bottom of the butter?


During the Maillard reaction large molecules are formed. These molecules can aggregate with one another and they will sediment down to the bottom of the butter. The particles will for instance contain milk proteins. Some recipes call for sifting out these particles, others will keep them in (remember that they contain a ton of flavor!). 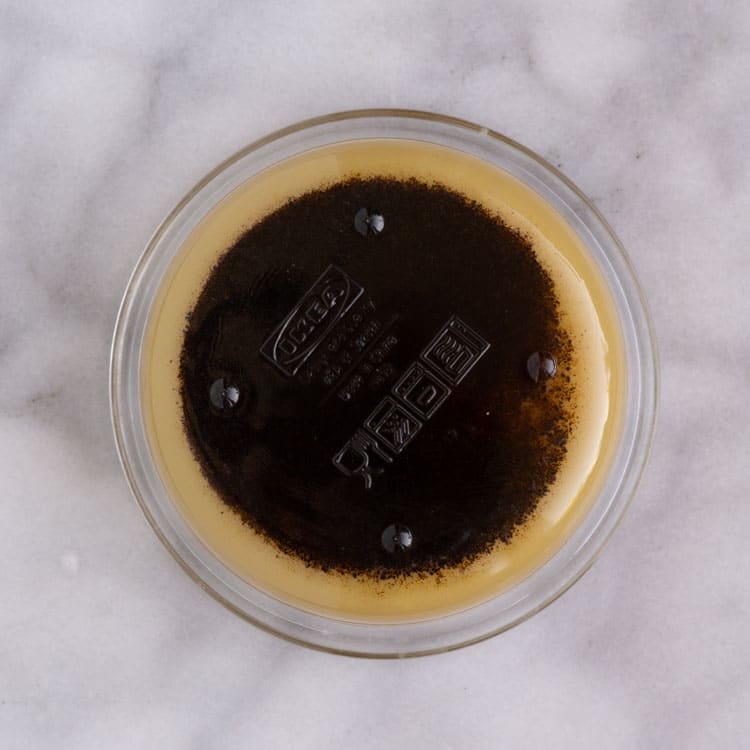 What can you use brown butter for?


Keep in mind that the majority of the butter hasn’t changed. Most of the water will have evaporated, but you still have the same milk fats in the butter as before. You’ve just added a bunch of color and flavor molecules. As such, you can use brown butter as a very flavorful fat, e.g. in cookies!.
Keep in mind that you shouldn’t heat brown butter too much anymore, or it will burn.

Can you make brown butter from margarine or oil?


No, you cannot. The reason that brown butter becomes a flavor bomb is because of the Maillard reaction between the sugars and proteins that are naturally present in milk. Margarine, nor oils, will contain these.