For years, if not decades, meringues, whether Italian, French or Swiss, relied heavily on eggs to make that light and airy texture. If you didn’t eat eggs, meringues were out of the question.

Egg whites are just such a unique mixture of proteins. These proteins just happen to be really good in holding on to air and creating and light and delicate but very stable foam. As such, for a long time, no one really knew of an alternative. That is, until a Frenchmen opened a can of chickpeas and decided to whip up the liquid that comes with the chickpeas (more on that later). All of a sudden, this completely new way to make meringue, without eggs become possible!

Since several of our readers have suggested to use this chickpea liquid to make our marshmallows, it was about time we gave it a try. Instead of going for meringues, we went for the (safer) French (baked) meringue option. It’s just almost surprising how well it worked! But why does it even work?

The invention of aquafaba

Most inventions in food aren’t sudden breakthroughs, instead they are continuous improvements upon existing. It would be impossible to find out who came up with the idea to whip egg whites into a meringue. The invention of this egg white alternative though, is the opposite, it can be traced back to a single person and point in time (although we’ll never know if this person really was the first). Its origin can be traced back to a Frenchman who wrote about his experiments in 2014.

Once he discovered this amazing ingredient, he wrote about it on his blog and started a Facebook group. In this group people started to build and expand on this idea. It was also in this Facebook group that a name for this new ingredient was agreed upon: aquafaba. Aqua stands for water, being the liquid in the can whereas faba stands for beans!

Aquafaba is the liquid in which chickpeas have been cooked. The easiest way to get a hold of it is by buying a can of chickpeas and pouring off the liquid, the liquid is the aquafaba. You can also make aquafaba by cooking your own chickpeas. Both will make a very similar product. The main challenge when making it yourselves though is that the consistency of this liquid should always be similar. If it’s too runny, it likely will not work.

Any fresh egg white (as long as there’s no yolk in it) can be whipped up into a light and airy foam. You don’t have to worry about the type of eggs you buy. All chicken eggs will work. For aquafaba on the other hand, that is not the case.

The properties of aquafaba will depend on how it has been processed. Since aquafaba is the result of a cooking process it isn’t as consistent as eggs. The type of chickpeas used might influence its properties, as might the addition of other

The viscosity (ease of flowing) of aquafaba if a measure for how easy it flows. If it’s too runny (especially a risk with homemade one) it won’t form a foam that well. In order to understand this, try to visualize a foam. A foam is nothing more than a lot of tiny air bubbles floating in a liquid. If this liquid is very runny, the air bubbles can escape from this liquid quite easily. If it’s more viscous it won’t do that as easily.

Of course, viscosity isn’t the only reason that aquafaba works. Aqaufaba, just like egg whites, contains a mixture of proteins that help to stabilize all these air bubbles. What is interesting though, is that scientists still have very limited visibility as to how this works and which proteins are of importance here!

Egg whites have been used for centuries. In the past decades a lot of scientific studies have been performed on eggs (and whites specifically). As a result, we know fairly well what an egg is made off (see our infographic). This knowledge does not (yet) exist for aquafaba. It wasn’t until 2018 that the first pieces of scientific literature got published on aquafaba, attempting to analyze the composition and its functionality. For now, we know it works, we just don’t exactly know how.

Even though not that much is known and understood about aquafaba from a researchers perspective, some initial work is starting to get published. Researchers for instance looked at the impact of the cooking process of chickpeas on the quality of the aquafaba. Cooking the chickpeas in acid seemed improve the quality.

What makes aquafaba even more interesting, is that you can use it in the exact same way as egg whites when you’re making meringue (see recipe below for an example). You just whip up the aquafaba with a whisk and then add your sugar. The sugar, as it does for egg whites, stabilizes the whole foam by further increasing the viscosity, making it harder for the air bubbles to escape.

Sign up to our weekly newsletter to be updated on new food science articles.

In order to better understand how aquafaba works researchers have investigated the effect of pH and regular salt (NaCl) on the foaming properties of aquafaba. Both of them don’t seem to have an effect on the stability and size of the foam. 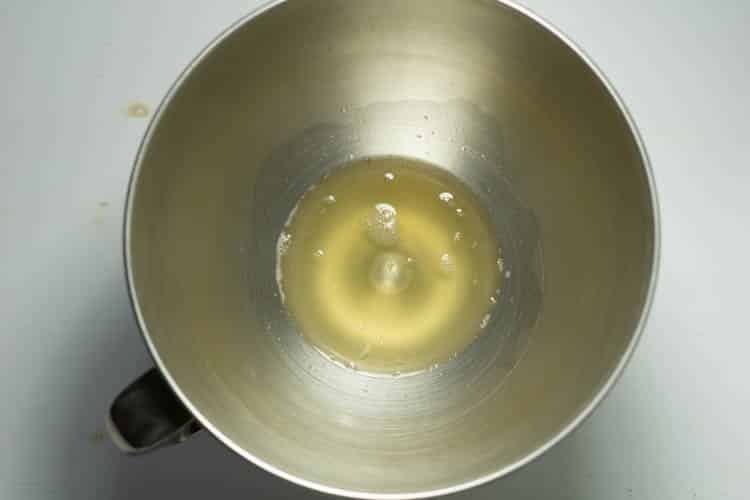 Aquafaba before it is whipped, it's slightly yellow.

If your aquafaba comes from a can of chickpeas or your own cooked peas, it cannot be kept long. Aquafaba is full of proteins and carbohydrates, serving as an ideal growing place for moulds and yeasts. Aquafaba can be stored in the fridge, for at least a couple of days. In as little as 4 weeks in the fridge it can be full of moulds!

If you want shelf stable aquafaba you should be looking for a dried version. By getting rid of all the moisture, micro organisms aren’t able to grow as easily.

Elyssa Goldberg, Everything You Need to Know About Aquafaba, the Vegan Wonder Ingredient, May-10, 2016, Bon Appetit, link