If there’s anything more maply than maple syrup, it’s maple cream. It’s not as common as maple syrup and you won’t find it in most supermarkets. Which is a shame, because if anything, it tastes even more like maple than the regular syrup.

What is maple cream?

Maple cream is a thicker version of maple syrup. As you can see on the photo below it doesn’t pour smoothly, instead, you’ll get blobs of it falling from your spoon. That said, maple cream is made from maple syrup and nothing else. The reason it behaves so differently is because of how it has been made.

Regular maple syrup is completely liquid. It contains a lot of sugar, but all of it is dissolved in the liquid. When you make maple syrup, you boil it down such that it concentrates enough to not spoil easily (high sugar content lowers water activity), but not so thick that the sugar in the syrup crystallizes. However, maple cream is cooked just a little more, causing the sugar to crystallize and thicken up.

So why & how does maple syrup crystallize into maple cream? This all has to do with the science of sugar crystallization.

Apart from moisture and several other ingredients, maple syrup is made up of a mixture of sugars (carbohydrates): sucrose, fructose & glucose. Sucrose is the same as the regular sugar you’d buy in the supermarket. One molecule of sucrose is made up of one molecule of glucose and one of fructose.

Most of the sugars, 88-99%, in maple syrup are sucrose molecules, with the remainder being fructose & glucose. That composition can change during the harvest season though as we discussed when exploring how maple syrup is made. Early in the season the sucrose content tends to be higher than later in the season. And lighter maple syrup tends to contain more sucrose than darker maple syrup (although it is not a perfect correlation).

The magic of sucrose crystallization

The (crystallization) science of sucrose is quite special and is the basis for making maple cream. There are a few things you need to know for understanding maple cream:

When you boil a sugar syrup to such high concentrations and temperatures though, it will not be stable when it cools down. There will be more sugar in there than can technically be dissolved in water at that temperature. What happens next depends on how you treat this so called ‘supersaturated’ solution and can be explained with a state diagram (which is very similar to a phase diagram).

So let’s walk through the state diagram and see what happens:

So that’s the theory! In reality, maple cream production is a bit more complicated. Since maple syrup doesn’t contain just sucrose and water, but also other sugars, as well as impurities that affect sugar crystallization the system isn’t as ideal.

Since maple syrup is a natural product, its composition can vary quite a bit throughout the season, between farms and between batches. This makes making maple cream more challenging, since every maple syrup might require slightly different temperatures to crystallize properly.

After you’ve boiled the maple syrup and leave it to cool down to form maple cream, you’ve still got a job to do: stirring. Leaving the maple cream to cool down will cause crystallization to occur. However, the crystals might form in some places and not as much in others. As a result, you can end up with few large crystals, instead of a lot of very small ones.

This is why you want to stir the maple cream while it’s cooling down or when it has just cooled down. The stirring will break up larger crystals and induce crystal formation of new ones (because of the friction). The mechanism is actually quite similar to the churning of ice cream during which you form small ice crystals.

If you’re making maple cream at home there is another trick to help induce crystallization: add sugar crystals. You can add powdered sugar (icing sugar) to the maple cream. The small, fine sizes of the sugar will form a starting point for crystals to form on. Note, if you’re making ‘pure maple cream’ this is not allowed since icing sugar is made from beet or cane sugar. 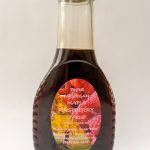 *You can use maple syrup to which a fruit syrup has been added (we used raspberry flavour maple syrup). However, that does increase the amount of fructose and glucose so you might need to boil it to a slightly higher temperature!

**If your maple syrup doesn't crystallize at all, despite vigorous stirring and waiting, you may need to boil it to a slightly higher temperature. Simply pour the syrup back into the pot and reheat again, this time to a few degrees (2-3C)  higher than the previous time and start over. If the opposite happens: you've got too many crystals and it has become too thick, add water, transfer back to the pot and re-heat, this time cooking to a few degrees lower temperature.