Let’s start with a little teaser before diving into the subject of additives and E-numbers. Have a look at this page, from a chemistry teacher in Australia. He has re-written the ingredient declaration of blueberries and bananas resulting in a long list of ingredients, including several additives. I think it’s a great illustration of how we should look at additives in this world. 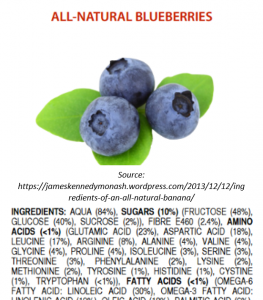 In Europe, additives can generally be found in the form of an E-number. There’s quite a trend to eliminate E-numbers in food. Whether this is good or bad, I’m not sure, it depends. In some cases E-numbers really help to make a food safer. What’s more worrying is that a lot of people simply don’t really know what an E-number is, it simply sounds sciency and not natural.

Although my blog is not focussed on health and more on understanding food through science and vice versa, I decided a post on E-numbers is essential. It will help a lot of other posts and I hope it’ll help you understanding your food just a little better to make the decision for yourselves whether you’d like the food or not.

What is an E-number?

Let’s start with the fundamental basics. What is an E-number? E-numbers are essentially shortcodes for additives that have been allowed by the European Union to be used in food. European legislation defines them as follows:

“Food additives are substances that are not normally consumed as food itself but are added to food intentionally for a technological purpose.”

In other words, an additive is not something you would eat by itself (for instance citric acid or xanthan gum), but are safe to eat, and have been added to something you would eat by itself (a pancake, piece of candy, etc.) to fulfill a specific purpose. There are a lot of possible purposes (on which more later), such as sweetener, emulsifier, acid, raising agent or thickener.

The European Union has set up a long list of additives that they consider safe to be used in foods. This list gives each approved additive a number, the so called E-number since it the number is always labelled on a package with an E in front of it.

When may an E-number be used?

Just because an additive has been approved for use in food, it doesn’t mean it’s allowed in any food or in unlimited quantities. Legislation is a lot more specific than that. For each food group and additive a list has been made as to when an additive may be used as well as in which quantity. 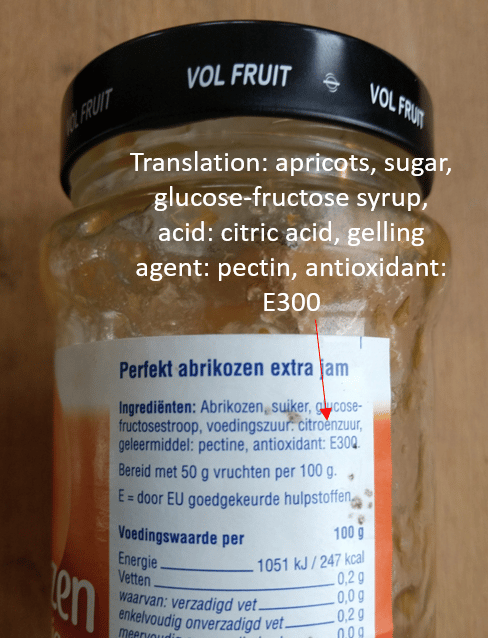 Let’s do this with an example. I took out a pot of apricot jam form our fridge and found three additives on the ingredient declaration. Great! So, I opened the appendix of the additive regulation and went on a search. I quickly found the list of all E-numbers, but this doesn’t yet tel you when they may be used. On page 74 (yes, it’s a huge piece of legislation!) I found the category ‘jams, jellies and marmelades’. My jam fits under this description so I had a look whether ‘my’ E-numbers are allowed. And yes, I found all three E-numbers in there!

All three are allowed following the ‘quantum satis’ principle, which means that the amount allowed is as much as is needed to achieve the required effect, but not any more.

Why are E-numbers added to food?

E-numbers (or additives) are added to food to serve a specific ‘technical purpose’. Legislation has defined for which purposes E-numbers may be added, and food producers also have to mention the reason why the additive has been used.

Again, let me use an example to explain that in a little more detail. This time I’ll use a pot of mayonaise which also happens to have an English ingredient declaration on it. There are three different uses of additives in this mayonaise: a preservative, a colorant and an antioxidant. Behind the function of the additive, the description of the additive is written, for example: preservative (potassium sorbate). Producers may choose to either write the entire name or just mention the E-number. 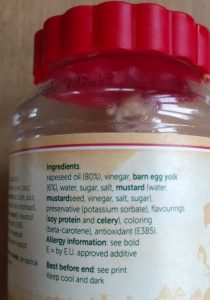 So in the case of mayonaise there are three reasons e-numbers have been added to the product. Preserving is a very common reason for using additives. Without certain additives a lot of foods couldn’t be kept as long as they are now. Potassium sorbate (E202 would be the E-number) in mayonaise inhibits the growth of yeast and moulds. The second reason, coloring is easy to understand. A color is used in the mayonaise the give the mayonaise a more yellow/orange colour, making it look more appealing to the customer. Beta-carotene (E160a) is a commonly used colourant, naturally present in for instance carrots and pumpkins. Last but not least E385 (Calcium disodium EDTA) is used as an antioxidant. Antioxidants are used to prevent oxidation of ingredients. Especially in a product as mayonaise (with a lot of fats and especially unsaturated ones) this can be an issue.

Legislation has actually defined which classes of additives exist, thus for which purpose addition of food additives is allowed. It would be pretty boring if I would list them all though, there are too many. Have a look at the sources mentioned below to find the different classes. Use the example mentioned above to know how to apply and recognize the different types.

So, I hope this post gave you a better understanding in E-numbers and additives in general. Let me know any further questions in the comments below!

Legislation documents aren’t generally easy to read through, however, I can imagine you might want to have a look at it yourself as well.

Regulation (EC) No 1333/2008: This is the basic document describing additives in food. When following the link you will find an overview of all changes as well as the latest version of the document. This file does not cover all E-numbers, these are covered in a separate appendix.

Commission Regulation (EU) No 1129/2011: This regulation contains the complete list of all E-numbers allowed in food in Europe. The link will bring you to the overview page where you can find the current status of the file as well as all amendments that have been made.

This material serves a purely educational purpose and may in no way be seen as legal advice. Legislation can change over time and the details stated above may not be the most recent. In case you are looking for professional advice on the use of additives in food, please look up the most recent legislation or ask for legislatory professional advice.