There are a lot of different styles and types of pie crusts, some are sweet, some savoury. Some crunchy, some soft and tender. Your heritage will probably determine what you call a standard or basic pie crust. That makes the title of this blog post a little dangerous, but consider this the FoodCrumbles basic for a crunchy stand alone pie crust. It can be made with or without any filling. Which is another good reason to call it a basic crust, there’s plenty opportunity for variation, what about stewed beef or chicken and leek? The crust itself is savoury, but you can fill it with a sweet filling of course.

If this type of crust is done well, you will get a layered crunchy texture. By adding and mixing the ingredients in the right order these layers are formed. This type of dough is called short crust pastry dough and can also be used to bake cookies. Once you understand why you have to take certain steps, it will certainly improve your crust quality. Also, it will help you look out for the right type of ingredients!

What is short crust pastry?

Short crust pastry dough is a special type of dough, made with mostly fat and flour. In this type of dough the fat is rubbed into the flour. Only once the fat has been ‘rubbed’ in will you add extra moisture (water or milk for instance). The trick of this type of pastry is that the fat will form little pockets of fat within the dough. Then, when the dough is baked, this fat will melt away. As a result, the crust will have a layered texture of various dough layers on top of one another, separated by empty pockets where formerly the fat sat.

This structures gives a very crunchy but also sturdy pie crust. The flakiness will make it easy to bite into and break. So whenever looking to make short crust pastry you’ll be trying to make these layers of fat in your flour.

In all recipes for short crust pastry you will find that you have to work cold. Use cold fats, cold liquids, don’t let the dough heat up. So why is that?

When you’re making short crust pastry you’re trying to make these pockets of fat in the dough. Common fats to use for this are butter, shortening or lard. You wouldn’t use oils. Oils are liquid and won’t form these little chunks or pockets of fat. Instead, the oil will flow everywhere. It can still be used for make a nice dough. However, it won’t get that flaky texture that you’re after for a short crust pastry dough. This does mean that when using butter or lard, the butter or lard shouldn’t melt. If they melt, it will have the same effect as using an oil.

This is why you have to work cool. Butter starts melting at room temperature, it becomes noticeably softer, which is a sign that part of the fats have melted. The same goes up for shortening and lard. So, during the whole pastry making process you’re trying to keep them solid and you do this by keeping everything cool.

The three most commonly used fats in short crust pastry are (clarified) butter, lard and shortening. They will all give a slightly different texture and structure to the final dough, it will also impact flavour. Shortening has little to no flavour, whereas butter has quite a lot of flavour. Flavour is very personal though and depends on the type of pie you’re planning to make. The impact on structure has some more scientific ground.

In general these three fats can be substituted 1:1 in a recipe. You will also often find that people use combinations of two of the fats. Everyone has their own preference. In Europe shortening is not a very common ingredient, so most doughs tend to be made with either butter or solid margarine. In the recipe below you will find that butter is used, but feel free to change these fat ratios up as one of your experiments.

Mixing only fat and flour won’t give a good crust. Instead, it will not properly cook and crumble apart very easily. Therefore, after the butter has been mixed in to the flour, some sort of liquid will be mixed in. This can be water or milk for instance. This water will actually bring the dough together and form it into a ball. Also, it will help the flour to cook, by absorbing part of the water in the dough.

In some cases eggs are added as well. This will enrich the dough further by adding some extra fats (of the egg yolk). Also, the egg proteins can help to form a sturdy structure. As long as you choose your fat:flour:liquid ratio properly though, they aren’t essential.

There is barely any gluten network formation in a short crust pastry. Once the (cold!) liquid is added it is mixed for as short as possible. Just enough for the dough to come together. Since gluten needs time and kneading to develop, this will not play an important role in short crust pastry.

If you live in Europe and want to try out American recipes or vice versa, you might have to watch out with short crust pastry. If you use European flour with an American recipe you might find that there is way too much fat in the recipe. Instead of creating a crumbly structure of fat and flour, you might have made a soft dough ball already, even before adding the liquid.

In the US a common ratio of flour:fat seems to be 3:2, whereas in Europe a good ratio tends to be 2:1. Keep this in mind when reading the recipes below! Also, use your eyes to determine whether the pastry is done. Once it’s become a good crumbly texture with larger and smaller chunks it’s good. If however, the dough still feels like plain flour or it has already come together in a ball, you’ve probably added too much or too little fat.

There are well known differences between these two types of flour, e.g. protein content, moisture content. However, these don’t necessarily seem to tell the whole story.

If your final crust doesn’t seem to want to cook or stays very very crumbly, there’s a chance you’ve added too much butter and it can’t hold itself together anymore.

There are two ways to bake your short crust pastry:

When to blind bake your crust?

Blind baking is ideal if your filling might interact with the raw pie crust. Blind baking helps to cook the flour and will dry out the crust. That way it is less prone to soaking up moisture of a filling for instance.

In the case of our beef or chicken pies you would blind bake first since these have very moist fillings. The moisture might actually transfer into the crust, preventing it from baking properly.

Another reason to blind bake is of course if your filling doesn’t have to be cooked at all. Also, in some cases the filling should only be baked for a very short amount of time, resulting in a miss match of the baking times. Last but not least, if a filling does not come up very high in the pie, it is good the blind bake first. The blind baking will help secure the sides of the pie crust against the baking tin. 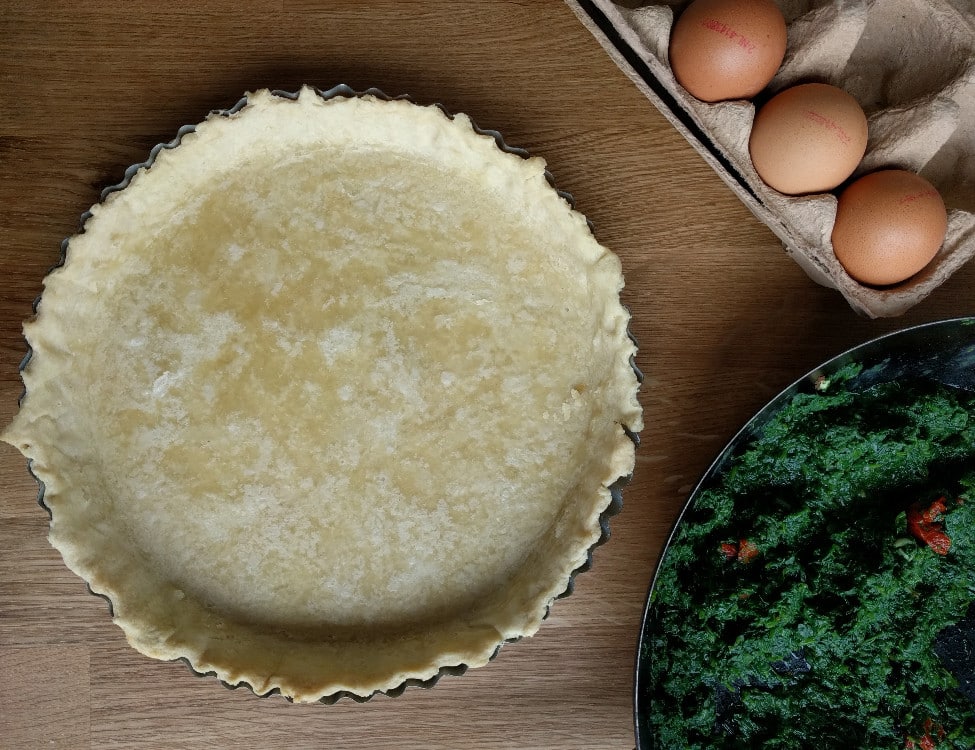 An example of a blind baked crust, it will be filled with a super moist spinach filling.

That leaves us with a few suggestions for making your ideal pie crust.

The pie crust used for the beef stew pie

It’s important to properly incorporate the fat into the flour as you’ve learned here. So to finish of, two simple tips that will sav you a lot of tired hands. You can of course mix the flour and butter with your hands, but there are two great alternatives as well though (see recipe also):