The secret behind that yellow dal, yellow rice, or beautifully colored curry? Chances are, it’s turmeric! A mere teaspoon can color a sauce or dish. Aside from those ‘typical’ dishes, you might also find it added to cheese, butter, or even popcorn! But, turmeric doesn’t have to be yellow. On the contrary, with a slight change in its environment, it changes into a bright red.

To understand, we need to have a closer look at the molecule responsible for these two colors: curcumin.

Turmeric starts out in the ground

If you use turmeric as a spice, you’ve likely bought it as a bright yellow powder. Turmeric starts out as a mass of roots (rhizome), growing underground, just like ginger and lotus root. The outside of the tuber is yellow/brown and rough, but upon cutting it open though you will find an orange-ish color, some brighter than others. It’s the inside you’re after when harvesting and processing turmeric root for making turmeric powder.

This further processing starts by boiling or steaming the ‘rhizome’. Once cooked sufficiently, they’re dried until they contain about 8-10% moisture. Traditionally this was done using just the sun, though nowadays it is also done industrially. Once cooked and dried, a manufacturer will remove the rough outside of the tuber (polishing). Then it’s a matter of grinding the remainder of the root into a powder. The resulting powder doesn’t just have a bright color but also a distinct flavor and smell.

Curcumin is the main ‘culprit’ for the yellow color of turmeric and is quite a stable molecule in its dry form. As is typical for colored molecules, the curcumin molecule contains several rings and double bonds which are used to ‘capture’ light.

If you’ve stored turmeric powder for a long (that is, years) period of time, you may have noticed that it barely changes color. And that is correct, dry curcumin, kept out of light, is very stable. Unfortunately though, if you use turmeric for both its color and flavor properties, that might fool you. The color is a lot more stable than the aroma which does decrease over time. Some of those typical turmeric aroma molecules are turmerone, ar-turmerone, and zingiberene (the last is also common in ginger).

Want to dig deeper into the chemistry of food? Why not start with our Food Chemistry Basics course?

Just like a lot of other natural food colors (e.g. the anthocyanins in red cabbage) curcumin is sensitive to the pH-value of its surroundings. At an alkaline pH (above 7, roughly within the 7-9.5 range) curcumin will turn a dark red color. Even though literature describes the process as ‘spontaneous’, in some of our experiments we did also have to add a little heat to the mix to actually initiate the color change.

You can make this red turmeric powder at home, we’ve described the process at the bottom of this post.

To strengthen the power of curcumin, you can extract it from the turmeric. In this form, curcumin is used as a colorant in a wide range of applications, not just food. It can be used to naturally dye clothing for instance (though it’s not too stable over time under the influence of sun light). Also, in India turmeric can be used to make sindoor, the bright red powder worn by married women on their forehead. By mixing slaked lime (which is very alkaline, so not the fruit called lime which is acidic) with the turmeric, it will turn the typical dark red color.

What else is turmeric made of?

That turmeric is made up of a mix of components shows well when you try to dissolve turmeric in water. First of all, the majority of the turmeric won’t dissolve. Instead, it will slowly sediment to the bottom of the liquid. What’s interesting though is that several separate layers of sediment form (especially under alkaline conditions). Some components will float, whereas others sink, demonstrating the difference in density.

This experiment makes bright red turmeric powder. Since you're aiming for a powder, you will only need very little water. You can make as much or as little as you want, simply scale up or scale down the quantities below.

This experiment is very similar to the last one, but instead of making a powder, you'll be making a red liquid. 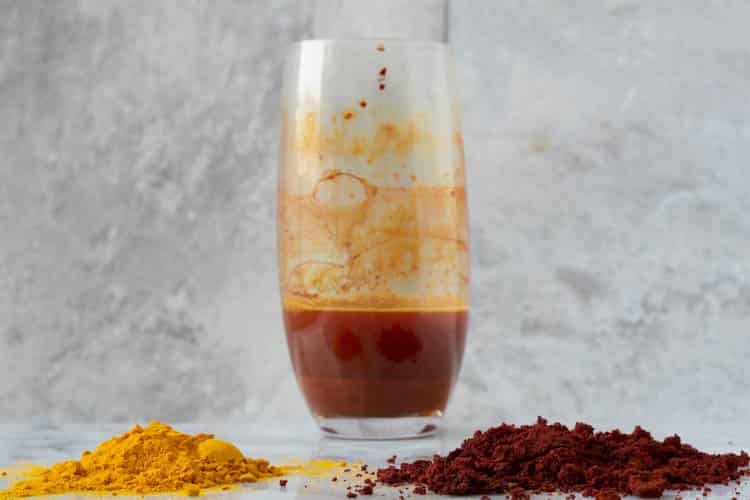 The color of turmeric is determined by curcumin (and some other curcuminoids). The chemical configuration of curcumin changes when the pH-level changes, especially when it turns more alkaline. However, the change is not immediate, as you noticed, you need some sort of heat to activate the reaction. Likely some sort of activation energy is required for the color change to set in or our baking soda is not sufficiently alkaline to induce the reaction by itself.

Keep in mind that these reactions are mostly reversible. In other words, if you place the red turmeric powder is a more acidic environment (be careful, acids + bases can react quite violently) it will turn back to its original yellow color!