Have you ever seen those profiteroles or cream puffs with a speckled decorated top? The pattern on top almost looks like dried out earth, with a lot of cracks and spaces in between the darker spots of decoration? Note only does the decoration look beautiful, it also makes those puffs beautifully round (as opposed to wrinkled), gives it a slight crunch and adds some extra flavour.

That decorated top is what we call a “craquelin”, French for ‘cracker. And it is indeed some sort of a cracker, on top of your choux pastry bun, making it a ‘choux au craquelin’. So how does it work, and if it doesn’t how to fix it?

What is a craquelin?

A craquelin is a thin piece of dough that you put on top of a choux pastry bun, just before you’re planning to put it into the oven. That dough will heat up in the oven and fold itself around the bun, decorating the choux pastry.

That crunchy decorative layer on top of your cream puff or profiterole is made up of only three ingredients: butter, sugar and flour. You blend them together in a coherent dough and then roll out the dough very thinly. The thickness of the layer is important since it will determine the thickness of your craquelin at the end. You tend to want it quite thin, 1-2 mm, so it is strong enough to hold together when picked up, but thin enough to soften quickly and thinly coat the buns.

After rolling and chilling the dough you cut it into the shape you want and place it on top of your choux pastry, after which you’re ready to bake!

How does a craquelin work?

As we mentioned, the craquelin on top of choux pastry is made of butter, sugar and flour. Initially, this may sound like a cookie recipe, but it definitely isn’t. It should bake as hard as a cookie. Instead, the dough will remain softer during and after baking. To achieve this, craquelin recipes tend to have quite a low amount of flour in them. Flour normally serves as a structuring ingredient and by decreasing it, it will be less structured.

You want the craquelin to be soft when it is baking in the oven. That way, it will ‘fold’ itself around the buns. However, you want it to be solid while you’re stamping out the shapes to put on top of the choux pastry buns.

It’s the butter in the craquelin that makes these two extremes possible. Butter is made of about 80% fat. This fat, butterfat, is mostly solid in the fridge, but completely liquid above 40°C (104°F). In between those temperatures the amount of liquid fat will increase for increasing temperatures. This is why room temperature butter is softer than that straight from the fridge. It is also why the craquelin is nice and sturdy when it just comes out of the fridge, but soft when you knead the dough together.

Because there is a quite a lot of butter in the craquelin and because butter melts, you will notice that the craquelin doesn’t really stay together well in the oven. This is great, because you want it to follow the shape of your choux pastry bun! Also, you want it to slightly break apart to create that beautiful textured top.

It makes the buns nice and round

What is really nice about craquelin is that it actually helps improve the shape of your choux buns. Choux buns, when they rise, can become a bit wobbly. How they rise, really depends on where most of the moisture pockets, that will expand, sit within the dough. The craquelin though helps to make sure that the whole outer layer of the choux is kept together. One part can’t bulge out more than another since it will be held back by the craquelin. Instead, the overall dough will be a little firmer and will expand more evenly. It will behave more like a balloon!

Craquelin is a relatively simple upgrade of your choux pastry. However, since choux pastry itself can be finicky, there are still quite some thing that can go wrong.

Remember that the choux pastry rises and opens up because of the formation of steam within the bun. There is no other ‘help’. In order for the choux bun to rise the pressure within the bun must be high enough to push out the still soft and flexible dough. If that dough is not flexible enough (often due to a wrong choux pastry recipe) or if something heavy (aka the craquelin!) is pushing it down, it might not rise well.

Try making a thinner or smaller craquelin to reduce the weight.

The craquelin falls off after baking

The craquelin isn’t really held onto the choux bun by anything. It’s only connection point is where the craquelin touches the choux pastry. If your craquelin is very crumbly, it might fall off the bun later. Whereas you’re likely never able to prevent any from falling off, there are some ways to reduce it.

Reducing the thickness of the craquelin might help prevent his. If the layer is thin, a bigger part of it sits connected onto the choux pastry. Also, gravity will have less weight to pull down, so it doesn’t come off as easily. Otherwise, you might want to improve the consistency of your craquelin to make it less crumbly.

Sign up to our weekly newsletter to be updated on new food science articles.

In some cases, adding a little extra flour to the craquelin might just make it a more more coherent. The flour will bind some of the moisture and hold onto the fat and sugar. Don’t increase it by too much though or it will become inflexible and tough.

There are holes in the craquelin

Sometimes you might have a few sections of your choux bun that doesn’t have any (or far less) craquelin than other parts). This might have been because of incomplete mixing.

Ensure that you mix the butter well with the flour and sugar. If there are large chunks of butter within the dough, those parts will melt almost completely in the oven. As a result, an empty spot or hole might be formed.

* The cocoa powder browns the craquelin and also gives the choux bun an extra hit of flavour. If you do not want that. Take out the cocoa powder and replace with 5 extra grams of butter and flour (so you're adding a total of 40g of each). The craquelin will have a lighter colour, but will likely be a bit more crispy. 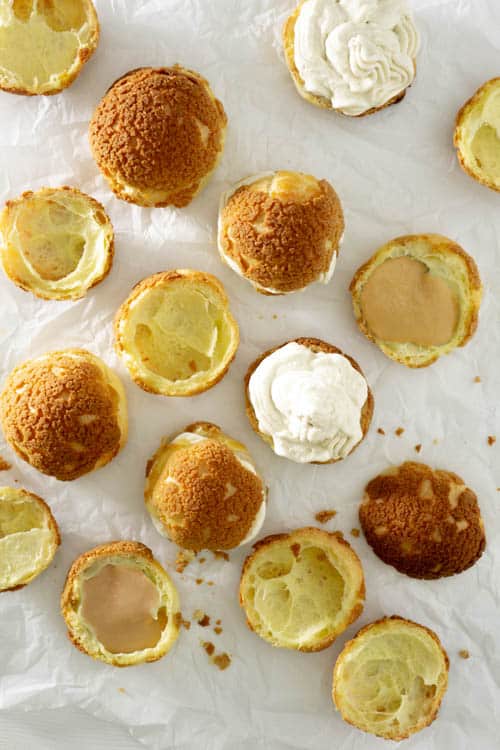