Ever seen a blueberry pancake recipe and transferred it into a banana one? Or saw this cool new cake flavour that you applied on ice cream? A lot of product and recipe development starts this way. You see an interesting combination and decide to apply it in a new innovative way. You can start tweaking the core ingredients or fillings.

We’ve written quite a lot of articles to help you understand the effect of the core ingredients: adding sour cream to your cake, or leavening agents to muffins or the role of sugar in cookies. The fillings that are then added to this recipe are often an afterthought. If the core works, it should be easy to mix something in shouldn’t it? However, if you’re baking something, that’s not always the case. The heat will break down your blueberries, releasing additional moisture and the fat in your cheese may melt, creating an oozy center. It’s nothing major, but knowing what might happen will help you create a perfect result!

Once you’ve got the base for your pancakes, cake, bread sorted, it’s time to spice things up. What about adding some nuts or fruits or maybe some chocolate or cheese? Some are very innocent, whereas other are less so, let’s start by categorizing them in three groups.

If you add too much of these inert fillings your product may start falling apart. The base of your product is what keeps everything together. Inert fillings don’t contribute to this. So if there are too many nuts in your muffins or too many seeds in your bread it may crumble apart more easily where these fillings sit because there’s nothing to hold it together anymore.

Check the heat resistance of your fillings. If these will brown (too) quickly in the oven compared to your base recipe you might have to adjust the baking conditions. An example are nuts in bread. If nuts stick out on the side of a bread, they tend to brown and burn a lot faster than the dough. As a result, you will need to turn down the oven or make sure the fillings don’t get as much heat.

Examples on the blog

An example of adding inert fillings is adding nuts in a seasonal bread or adding chocolate chips in ice cream. These fillings are tricky. You will have to think about how to add them and about what they will do to your product.

A lot of pies will call for your to pre-heat vegetables before adding them into the pie. One of the reasons for doing this is to start breaking down the structure of the vegetables and releasing some of that moisture.

In other cases you’d add some ingredients to capture part of the moisture that is released. In an apple pie for instance you can add some breadcrumbs on the bottom of the pie to capture moisture. Also, mixing the apples with some sugar will help to hold onto that moisture.

You can of course also adjust your base recipe to take the additional moisture in account. If you add a little less moisture to blueberry muffin batter you will prevent the final result from becoming all soggy.

Examples on the blog

There are plenty of examples on FoodCrumbles of adding high moisture fillings. It’s pretty common and you must have run into issues with moist fillings as well. We already mentioned the apple pie before, but what about mushroom risotto. Mushrooms contain a lot of moisture which will only be released once it’s heated. This is why you have to add the mushrooms close to the start of the cooking process, else you’ll end up with a lot of extra mushrooms. In other cases adding a moist filling is used in our advantage in carrot pancakes, carrot cake and zucchini cake. The moisture in the vegetables actually helps to create a moist structure. 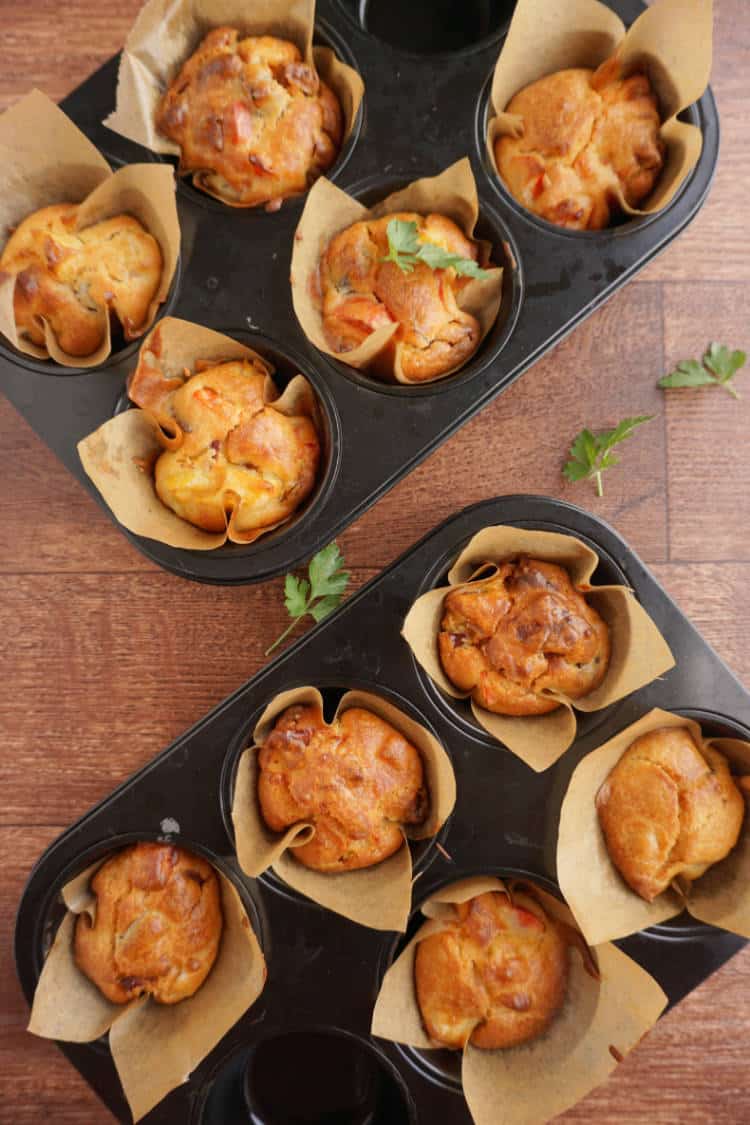 Think or cheese or dried sausage as good representatives of this group. These are fillings that are solid at room temperature and contain fat that doesn’t interact with the batter when they’re added. However, once they’re heated up the fat in the product will melt and soften. It will seep into the rest of the product. If you use too much of these fillings your product may become too fatty and may not set properly anymore. However, if used in a decent amount, they tend to contribute to flavour since the fat contains a lot of flavour molecules.

The photo at the top of this post is a great example of a recipe that can be tweaked with good fillings. These are savoury muffins (based on the recipe by Laura’s bakery), small bites with sausage, cheese and vegetable fillings. It’s all about the balance of these ingredients. The fatty fillings, cheese and sausage, are essential to give the muffins some flavour. Without them they’re pretty bland. They also gives some interesting texture to the muffins.

The vegetables are there to lighten things up a little. However, you have to be careful with them because they can make these muffins very soggy if you add too many. Also, they can make the muffin a little bland if you don’t balance them well with the cheese and meat.

Fillings - choose whichever ones you like but take at least eather the meat or cheese for enough flavour, choose only two veggies, or limit their amounts to prevent the muffins from becoming too soggy