French toast is one of my favorite ways to finish old, stale bread. A good soak in a soggy egg mixture, softens the bread and still makes it great to eat.

When in high school one of the first things I was taught to make in cooking classes was French toast (don’t ask me why we learned to make French toast, I have no clue). We made it in a frying pan, add some butter in the pan, fry you toast on both sides until a nice golden brown and voila, there’s you French toast. It’s the method I used when discussing cinnamon French toast.

The method is always a little tricky, you don’t want the inside to be uncooked when the outside is finished. Nor do you want to make the inside all dry and overcooked simply because the outside hasn’t browned well yet.

So, when I ran into a beautiful recipe making the French toast in the oven I had to try it. It might solve that over/undercooking problem and it seems to make a lot larger portions with far less effort!

Before attempting to discuss the differences between an oven baked and pan fried french toast I’ll make sure you understand what both are :-). In that previous post on cinnamon french toast I shared a recipe for a pan baked variety. Below you can find an oven baked version.

Really, both are very similar. An egg mixture of milk + eggs, some sugar and some spices is made. Slices of bread are then soaked into that mixture. Once they’ve soaked well they’re baked, either in the oven or in a pan. The oven recipe I share bakes all slices in one go in one oven dish, whereas the pan fry recipe fries each slice individually.

The recipe below is based on a recipe from fix feast flair, their post has super beautiful photos!

What happens when making french toast?

Several processes happen that make our french toast. First of all, the bread soaks up the moisture in the egg milk mixture. Especially when the bread has staled slightly, it will soak it into its pores. When baking the french toast the mixture will be spread all through the bread. Because of the heat the eggs in the french toast will set. This will transform the mixture from a runny liquid substancy into a soft spongy consistency (as it does when making custard for vanilla ice cream).

In order for the egg to set the entire french toast, up to the center, has to reach 60-70 degrees Celsius. In this temperature range the egg proteins will set (there’s not one specific temperature since it actually depends on the exact composition).

At the same time, the outside of the French toast will brown, this is a combination of the Maillard reaction as well as caramelization. These reactions tend to speed up once the outside of the bread is somewhat drier (less moisture) and warmer (well above 100°C).

In other words, making French toast is a balancing act between cooking the center and browning the outside! 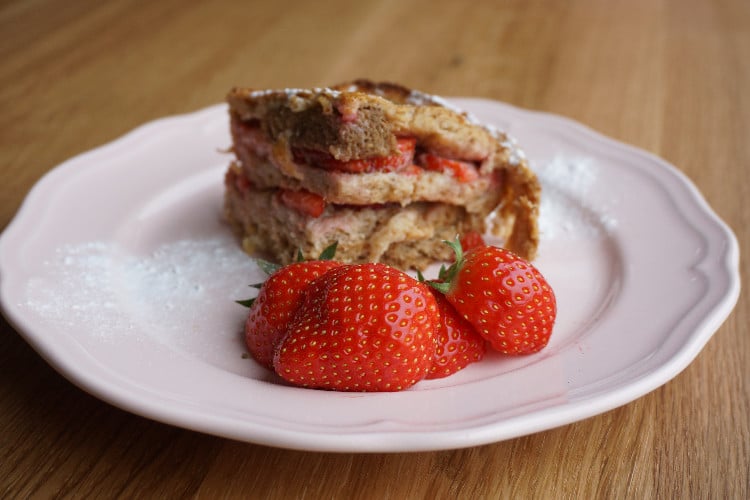 When baking french toast in a pan or an oven two different ways of heat transfer are utilized.

When baking french toast in a pan the toast is heated directly through the surface of the pan. The pan is heated by gas or electricity and this heat is directly transferred onto the French toast. This is a very efficient and fast way of heat transfer. Imagine placing your hand on the pan, it will most likely burn immediately.

In the oven on the other hand the heat is not as direct. Instead, the whole chamber in the oven is heated. The air in the oven then has to transfer the heat to the french toast. Imagine putting your hand in the oven, it’s not comfortable, but you can stay in there long enough to take things out (as long as you don’t touch the walls). The air doesn’t transfer the energy as efficiently.

Because of these two different heating methods each one poses a different challenge:

The solution is simple, when using a pan, use a moderate heat, don’t try to rush it, take your time. In the oven, put on the grill for the last few minutes to brown off that top!

To me, both methods give a different snack. I really liked the oven baked french toast. It was nice and gooey and it was very nice you can add fillings in between the layers. However, it lost that crunch a bit. But, great advantage, the time to make it is considerably shorter!

For me though, both will remain in my ‘repertoire’, changing to whatever I/we feel that day!