What does a popsicle teach us about the role of sugar?
Sign up for our free mini-series.

Sometimes, I just want to share a recipe. No extensive science, just the food, just to make sure I store the recipe somewhere so I can make it again (I have a tendency to lose recipes I find online, for my cookbooks I have a Post-It system that makes me remember recipes, but digitally things just get lost). This post started out that way. The coffee chocolate caramel ice cream tasted so good I just had to share it.

But then, I noticed there’s more science to this ice cream than I realized. Adding chocolate chips to ice cream is not as straightforward as it, that is, if you don’t want to break your teeth when eating this ice cream!

I’ve made ice cream before on this blog, both with and without eggs and I’ve writte about the science of ice cream (more specifically freezing point depression). This time however it’s not the ice cream itself that’s special or ‘scientific’. Instead, it’s the extra inclusions in the ice cream: the caramel & especially the chocolate.

We’ve discussed what happens to caramel upon freezing before. Caramel contains a lot of sugar and as we know, adding sugar will lower the freezing point of the sugar + water mixture. This makes the caramel softer at lower temperatures. Using a caramel in an ice cream will thereforo not tend to give any problems. It will tend to stay soft enough (sometimes even too soft and sticky) to still eat well.

Did you ever place chocolate in a fridge? You probably noticed it became a lot harder. Now imagine freezing a solid chocolate to -18°C. It will become even harder and if large chunks are used, it might be impossible to bite through. When mixing in this chocolate in an ice cream, it’s an important question to ponder upon a little.

Thus we have to find a way to make chocolate softer in ice cream. There are roughly three ways to do this:

Chocolate is tempered by properly controlling the temperature of the chocolate since the desired fat crystals are formed at a specific temperature range. By not doing this proper temperature control we can create those normally undesired crystals. But in ice cream we might want them since they make the chocolate softer!

As a home chef it’s hard to adjust the recipe of your chocolate, so options 2 and 3 are more common. In the ice cream mentioned below, we’ve used a combination of the two to make a good chocolate inclusion. We’ll discuss two methods. Both involve getting rid of the temper of chocolate by melting the chocolate (thus removing all those stable crystals) and cooling it uncontrolled (or at least such that not the good crystals are formed). The way the chocolate is ‘shaped’ differs.

Melt the chocolate completely (for example, in a micro wave, 30s at a time, mixing in between) and spread out on a countertop or parchment paper. Leave to cool. You will notice it will take quite a while and it will never become very snappy. Break the chocolate in small pieces and mix in with the freshly made ice cream.

This method will give you control over the size of your chocolate pieces and how they’re mixed in.

Melt the chocolate completely (same as you’ve done above) and pour the liquid chocolate into the ice cream just before putting it in the freezer. If you’ve churned your ice cream, it will be cold and the chocolate will become solid pretty much immediately. If your ice cream mixture is still warm though, you run the risk of not making chips, but making a chocolate ice cream with chocolate everywhere. 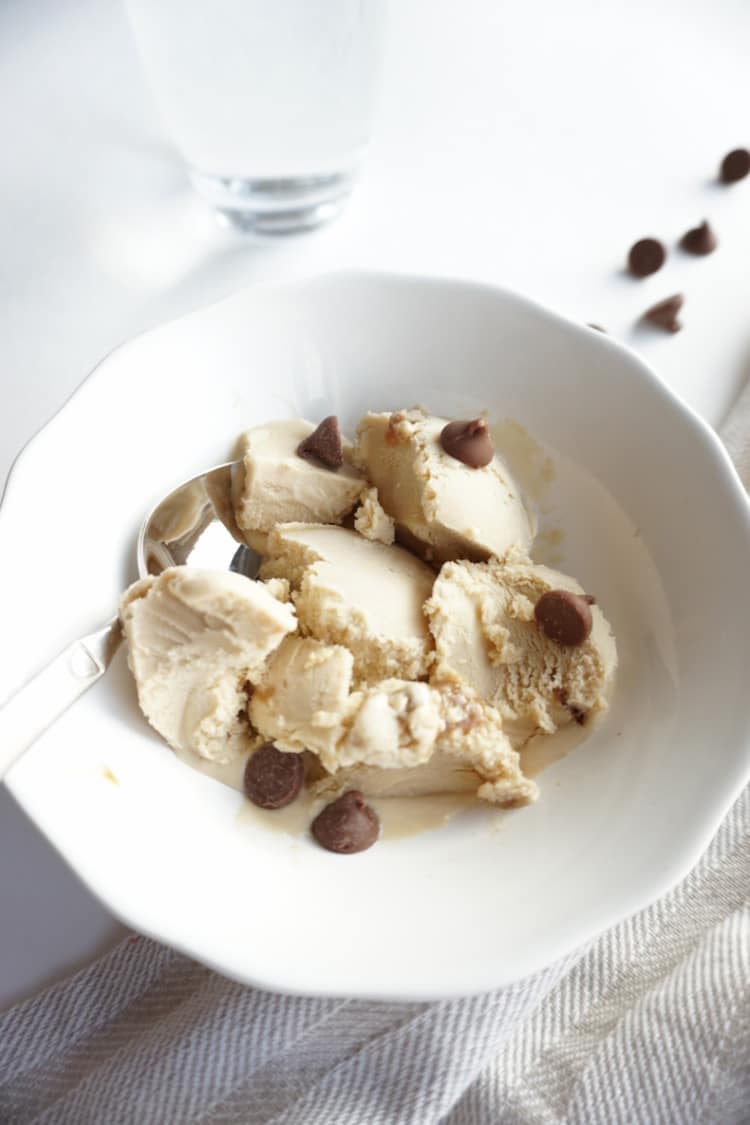 So now that we know how to make chocolate pieces for your ice cream, it’s time to use it. In the ice cream below method 1 was used to make the chocolate ‘chips’. It gave a great snappy texture and the chocolate broke easily upon eating.

The recipe I used as a starting point came from the blog by David Lebovitz. The original recipe is inspired on a Mexican ice cream, mine is again inspired by that one, but changed about a little more.

Would like to learn more about ice cream? Why not consider reading a book? Here's a list of some of our favorites.