If you’ve ever made a meat pie, stew or sauce you know that one of the challenges is to get that right consistency. You don’t want it to be too runny, nor too thick. One of the most common tricks you might have used in such a case is to add a little bit of flour or corn starch. A spoonful can already do wonders here.

But why does it work? And are there any disadvantages of doing so? Let’s zoom in on some starch science.

A lot of sauces and fillings are thickened with flour.Flour is one of those staple ingredients, used for so many different foods. Without flour, no bread, no pies, no cookies, no pancakes. In these foods, flour is actually the hero, without flour, they wouldn’t be there. There are again a lot of types of flour, however, in this case we’ll stick to the basic wheat flour. This can be all-purpose, bread, cake or pastry flour, as long as it’s wheat flour, it works in the same way.

When using flour as a thickening agent, it’s more of an aid, than the star player. So which properties of flour are we looking for? In the infographic below you can find the composition of flour. It’s mostly, water, protein and starch. These proteins are the gluten of flour. When talking about its thickening properties these aren’t that relevant. They become more important when discussing gluten development in bread or scones. Gluten can give a bread its structure and consistency. But for the gluten to work, it needs to be able to form a network, and it will not do so when thickening a sauce.

Instead, the thickening properties of flour are caused by the starches in the flour.  Starch is a large complex carbohydrate and consists of two types of molecules: amylose and amylopectin. Both are polysaccharides, made up of long chains of glucose. Amylose is the simple structure, it’s a long linear chain, whereas amylopectin isn’t linear, instead the chain has a lot of branches. Together they intertwine and are distributed through wheat in the form of granules.

When heating flour in water, these starch granules absorb water and swell up. This is the first stage of thickening, simply absorbing the water will thicken a mixture since there’s less free water left. When properly heated through, these swelled granules can even burst apart. When doing so loose starch molecules will be released in the water. These will again bind with water, aiding the thickening again.

When baking bread this process also happens, it’s what cooks the bread. Similar when boiling potatoes, it is the starch at play again. Even when making a macaroni pie, it’s the cooking of the starch that helps to properly firm the thing up! 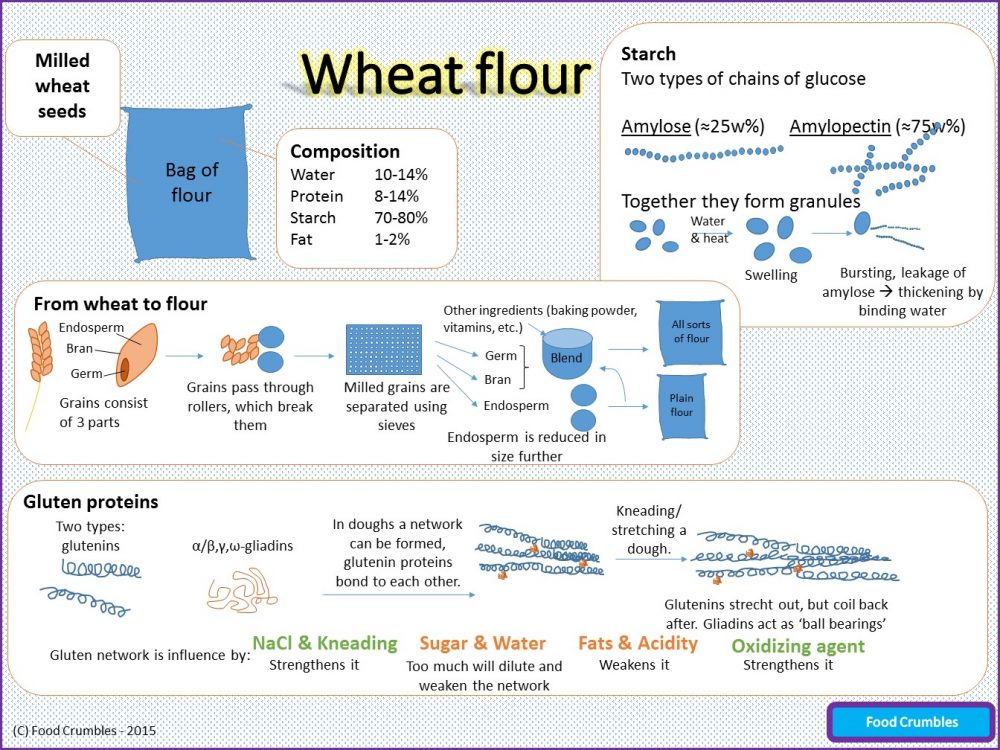 The simplest way to control the thickening caused by flour, is to control dosing of course. More flour will thicken more than less flour. However, the temperature and time treatment will also have a big impact.

Flour loses its thickening capacity if it is heated up to too high temperatures for too long. Sometimes this is even desirable, for instance when making a dark roux. A dark roux is made by heating butter + flour up to high temperatures until the mixture has turned a dark brown. At this point it is packed with flavour, but the flour doesn’t serve as a thickener that much anymore.

When making a white roux on the other hand, for a bechamel sauce for instance, you do want to use the roux to thicken a sauce. In that case you only heat and mix the butter and flour for a short amount of time. This way, it will not develop a lot of flour, but will have a lot of thickening strength.

Besides temperature, the acidity and amount of sugar and salt play a role as well. However, these are less straightforward, interacting with one another as well.

It’s not always easy to know when a sauce has thickened to the right consistency. If you’ve added too much water, it might take a while for the consistency to be correct. In that case you’re not only activating the starch, you’re also evaporating water. What makes it even harder, is that upon cooling the starch set sauce will thicken further. This is due to the relaxing amylose molecules. They will stop moving around as much and instead form more of a gel structure.

How to add starch?

Ever tried to add a spoonful of flour to a soup and ended up with lumps of flour in the soup? You’ve certainly not been the only one! It is very tempting to quickly add some flour to thicken your soup or sauce. However, if you do. the starch in the water will immediately start to swell. The hot water causes it to happen. As a result, the water cannot penetrate into the clump of flour anymore. As a result, the inside will remain dry, whereas the outside has swollen starches.

The way to add flour to a hot watery dish is to first mix some with a little bit of cold water. Stir it to get rid of the clumps and only then add it to the soup or sauce.

If your dish is still pretty dry, e.g. browned of meat with some vegetables, you can add the flour directly. Mix it through with the rest of the ingredients until you see no more dry flour. Now it’s fine to add additional water to make it into that soup or sauce. By mixing it in first you make sure that the clumps are gone, before there’s plenty of water for the starch to absorb.

Last but not least, you can also add flour at the start, together with a fat, butter for instance. This is how a roux is made. The fat and flour will mix, the flour won’t be able to form clumps because of the presence of the fat. Once the water is added the flour can start to do its job and thickening the roux.

It’s not just flour that you can use to thicken up your soups, sauces and pie fillings. There’s a lot more choice. In soups you might see that a recipe calls for grated potato. Again, it’s the starches that result in the thickening. Potato starch is claimed to be one of the most effective starches for thickening, but might not always be as stable over time.

nother common addition is the use of corn starch, again, it’s the same mechanism. The starch absorbs water and that way thickens up the mixture and the same goes up for rice and tapioca starches.

When you add too much flour to a soup the flavour of the soup will go down noticeably. The flour binds flavours and as a result you can’t taste these as well anymore. Therefore, you want to limit the amount you add, to maintain the distinct flavour of your food.

There are a lot of examples where starch is or can be used for thickening of foods. Here we use two pies as an example, see the pie crust post for the recipe for the crust itself. In one, the cranberry apple pie, the starch is used to ‘catch’ the moisture that is released during cooking. In the chicken, leek and bacon pie though the starch is added earlier on in the cooking process. Here the moisture of the ingredients is caught to prevent it from soaking in the crust too much, but also to create a more indulgent filling.

Skip to Recipe
← Back to login