Since making muffins, pancakes, pies and cookies isn’t something I can do all the time, since having those for breakfast, lunch and dinner probably isn’t a great idea, I decided bread baking would be a good alternative. The past few months I’ve given a lot of new recipes a try and I think I’ve reached a point where I can comfortably make a simple bread. It might not always be perfect, but somehow freshly baked bread just about always tastes good! Therefore, today a bread science basics post: how to make a basic brown bread.

The most simple bread to make is a white bread. However, I do not particularly like white bread, unless it is a special type, such as a French baguette or a brioche. Therefore, my basic bread is a brown bread. I have made this recipe a lot of times already, it is originally a focaccia recipe from the NY times. However, it works very well as a basic whole wheat brown bread.

The ingredients of bread

The simplest type of bread (from an ingredient perspective that is) is a flat bread which can be made with flour and water only. However, for fluffy airy breads you need at least one more ingredient: yeast. In this recipe we find two more ingredients: salt and sugar. These both have an effect on the yeast used in bread.

When making bread it helps if you understand the role of the different ingredients so that is what we will be focussing on in this post.

Without flour, no bread can be made it is the first requirement for any bread. There are a lot of different types of flour. In this recipe two flours are used: regular (white) flour and whole wheat flour. Both of these flours are made of wheat. In the infographic the main characteristics of wheat flour are shown.

Plain flour only contains the endosperm fraction whereas whole wheat flour also contains germ and bran. Both flours contains both gluten (proteins) and starch (carbohydrates). As was discussed in a post comparing scones and bread gluten is important to strengthen the dough. Gluten proteins can form a network. This network can hold on to air bubbles. Gluten have to be ‘developed’ during bread making as this will give a fluffy bread instead of a dense clump.

The second most important ingredient is water, or any other type of moisture such as milk, or eggs. For any bread flour and moisture are mixed. This initiates a lot of different processes. First of all, various ingredients in the flour hydrate. Starch and gluten both need some time to bind water and form the required structures. If flour and water are mixed and left for half an hour or so, you will notice that the structure after this half an hour has changed considerably. because of this.

Because of the hydration the gluten can move inside this mixture for form this gluten network. Without water the gluten won’t be able to move and form these networks. Water also allows the migration of carbon dioxide which is produced by yeast, through the dough, allowig the formation of bubbles.

If not enough water is added a dough won’t be flexible. This type of dough cannot rise properly. Too much water on the other hand can cause a dough to collapse easily because there isn’t enough ‘strengthening’ flour. Luckily, within bread the margins are pretty wide.

In order to transform a flat bread into a fluffy bread a raising agent is used. Baking power and soda could work, however, these work only once. Thus once the bread has expanded nothing else happens. When developing a complex gluten network however, you might want several rises. Therefore yeast is used. Yeasts grows and ferments in dough, producing a gas, carbon dioxide, to help the bread rise.

Yeasts are living microorganisms and use sugars to grow and ferment. Since they are alive they keep on leavening the dough until they die. As long as they have enough food (sugars), a comfortable temperature and no harmful components (such as too much salt) around them, they keep on growing.

In a separate post I dive into the details of the fermentation of yeast. 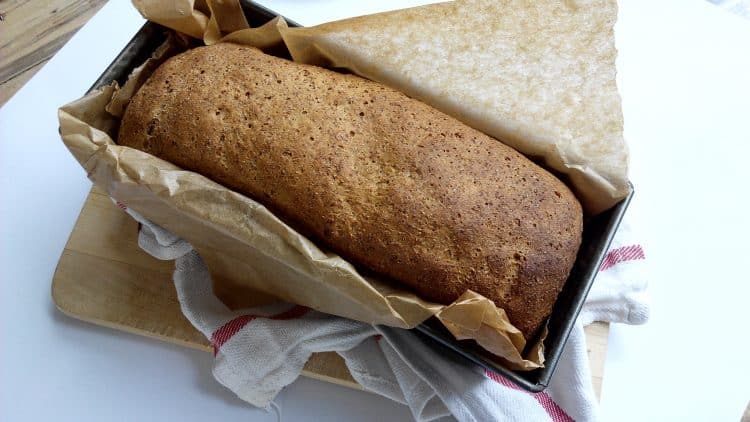 The addition of sugar is not required to make a good bread, but it can help in making bread. Sugar can be added for a variety of reasons:

Last but not least: Salt

Finally, salt is added in a lot of bread recipes. Again, the addition of salt isn’t essential, but it does help improve the bread. The two main effects of salt are:

With this knowledge in the back of your mind, head out to try the basic recipe! Bread making is a lot of fun and the possibilities are endless! There are quite a bit of posts on bread making on this website, so browse around to improve your skills and have lots of fun!