Pancakes, who doesn’t like them? Especially since you can tweak and change them in whichever way you want! You can make thick pancakes, thin ones, large, tiny, airy, dense, sweet, savory, etc. etc. If you’ve travelled around the world, or simply browsed the internet you will have noticed that every country seems to have their own pancake style. We’ve discussed French crepes (super thiny) and a Dutch recipe. Today it’s time for an (what I call) American style pancake and not just any type, no, a carrot cake style pancake!

So discuss pancake culture and what I call an ‘American pancake’ first. Since I live in the Netherlands and grew up here, Dutch pancakes are my reference when I talk about pancakes. We Dutch tend to eat pancakes for dinner, thus in the evening. They tend to be large (cover a whole plate), not too thick and tend to be baked with both savory and sweet toppings. Just to name a few styles: boerenpannenkoek (this is a farmer’s pancake and could include bacon, cheese, onions, bell pepper, mushroom), the bacon and cheese pancake is popular, a pancake with ice cream or fruits (to finish the meal with something sweet). Even though the filling might be either savoury or sweet, we always top off the pancake with sugar syrup or icing sugar. Sounds weird, a ‘farmer’s pancake’ with sugar syrup? It isn’t, just give it a try :-).

Imagine our disappointment when, as a kid, we went out to eat pancakes in the USA. We thought it was weird that there were long line-ups for pancake restaurants in the morning, and even stranger that most pancake houses were closed in the evening! Once we finally found a pancake house that was open in the evening, we got this big pile of thick, dense pancakes with a lot of syrup. That wasn’t really what we expected!

By now, I understand those qeues at American pancake restaurants in the morning and absence of lines in the evening. I even regularly eat pancakes in the morning for breakfast (in the weekends only though).

These two styles of pancakes are pretty different. When baking a Dutch pancake we aren’t looking for a lot of rise or any fluffiness. However, for American pancakes we do want them to be airy and fluffy. This way they’ll soak up the liquid maple syrup very well. In order to do so, we want the batter to be thick enough so it won’t spread. If the batter spreads thin (as it does for French crepes) you’ll never get a fluffy risy pancake. 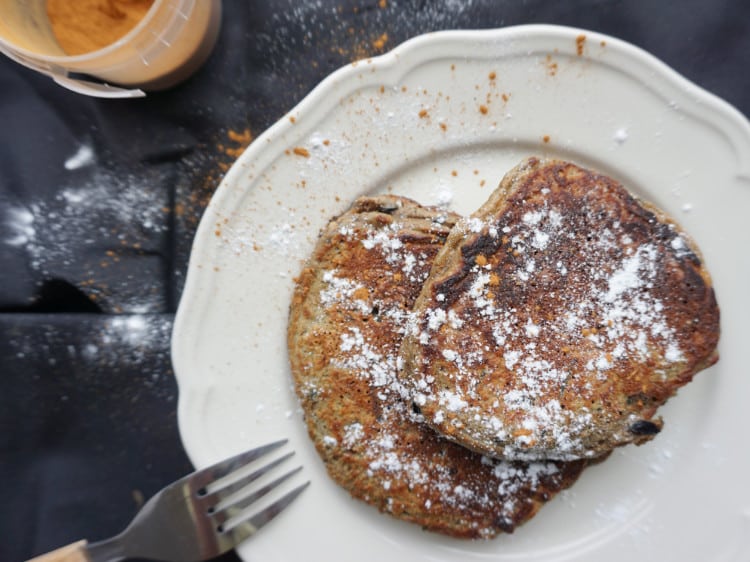 Another typically American phenomenon, is the creation of all things carrot cake (or red velvet) and to create all sort of pancake styles. So, to show you your way around American style pancakes, I thought it would be best to start out with a carrot cake pancake recipe. It’s super fluffy, not too complex to make and, just like any pancake recipe, very versatile.

The recipe is inspired by one from Cookie + Kate.